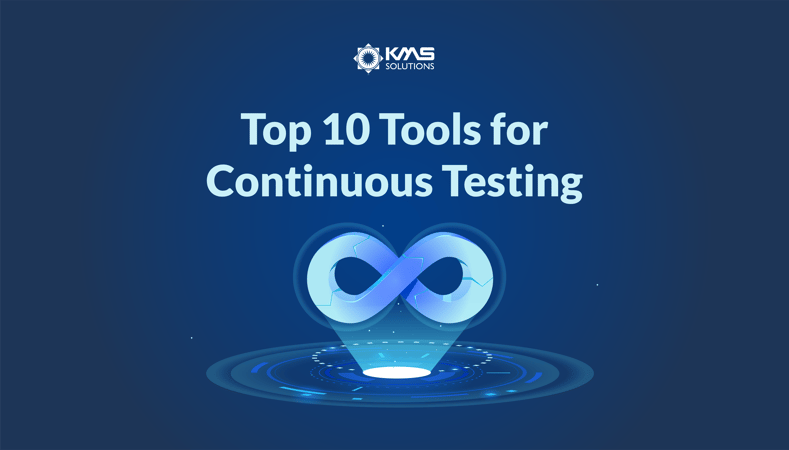 As DevOps and CI/CD become more widespread, Continuous Testing is essential for teams to deliver Quality-at-Speed and get better control across the testing and development process. But when consulting enterprises on Continuous Testing, one of the software testing problems they have is which tool or sets of tools to adopt. With a multitude of tools out there, choosing one that fits is no easy feat.

In this article, we give a brief run-through of the ten tools that are the most suitable for Continuous Testing, plus their pros and cons for your consideration.

Katalon is an end-to-end test automation tool well known for its suitability to Continuous Testing and DevOps. Based on Selenium & Appium, Katalon offers a wide array of codeless features that helps even inexperienced testers perform automated testing, record the CI/CD process, and report with built-in test analytics.

Katalon works well with most web apps, mobile apps, desktop apps, and APIs, whether on Windows, macOS, or Linux.

Katalon can be a game-changer for your Continuous Testing and Automation Testing strategy; users can easily integrate it with Jira Agile and popular CI tools such as Jenkins, Bamboo, Azure, and CircleCI.

Katalon is loved by novice testers thanks to its easy-to-use features and codeless extension. It also appeals to experts as it provides many scripting extensions. The Katalon Store provides plug-ins to increase automation features and integrations with CI/CD solutions.

Its compatibility and integrability are also market-leading. The tool can be flexibly deployed on most infrastructures, allowing for the implementation of Continuous Testing on all OSs, browsers, devices no matter if the Software Under Test (SUT) is on the cloud, on-premises, or hybrid.

Katalon makes it easier to track product quality, performance, and related issues thanks to its insightful reports, real-time monitoring, and instant feedback system.

Selenium is most testing teams' go-to solution for web automated testing. As a free and open-source framework, Selenium offers a great start for testers that are exploring the benefits of Automation Testing in Continuous Testing.

Selenium is more suitable for experienced automation testers - those who are skilled at programming and scripting. Selenium's first-time users may find it pretty hard to get around the tool. All in all, once you master Selenium, it can be very powerful for Continuous Testing; it can enable cross-environment testing as it supports some of the most widely-used OSs (Windows, MacOS, Linux) and browsers (Chrome, Firefox, Safari).

The only limit is that Selenium requires testers to code and script to integrate it with other tools in the CI/CD pipeline. If it costs you too much to hire, train, and manage testers who can code, there are alternative tools that are codeless, more intuitive, but just as powerful as Selenium - like Katalon.

Appium is a lot like Selenium but is generally used for mobile apps. Appium’s root is from Selenium; it uses JSONWireProtocol to interact with iOS apps and Selenium’s WebDriver for Android. Appium can also be used for mobile testing provided that real devices and real browsers—rather than simulators—are used to test

Why Appium for Continuous Testing?

Appium can be configured to be included in your CI/CD pipeline. Not only does it aids in cross-platform testing, but Selenium can also be used for both iOS and Android. Moreover, testers can use it to develop, store, execute, and report test cases on the cloud.

But similar to Selenium, teams applying Appium to Continuous Testing can have difficulty in the first few steps where tools are integrated. The reason is that Appium is best suited for users who have scripting expertise.

Teams that are low on resources and manpower can opt for codeless and easy-to-use tools such as Katalon. Since Katalon is built on the Appium framework, testers are free from the headache of setup and configuration.

Eggplant is all about making test automation easier with its unique use of images. Formerly known as Testplant, this software supports a wide array of platforms (whether it’s web or mobile) and also Point of Sales (POS) applications. Eggplant is also famous for its AI3 - a combination of Artificial Intelligence, Automation Intelligence, and Augmented Intelligence to identify critical areas in the SUT that require immediate testing. This alone makes it a great candidate for teams with low resources and limited scripting expertise.

As intuitive and easy-to-use as Katalon, Eggplant is among the most suitable tools for manual testers who practice Continuous Testing and DevOps but know very little about programming.

The cool thing about Eggplant is that it replicates users' points of view through screenshots and images to interact with the SUT.

Users of Eggplant are provided with access to test lab, which is a cloud devices management system that teams can apply to CI/CD. Eggplant can be integrated with a wide range of CI/CD tools, including Jenkins, Bamboo, CA Agile Requirements Designers, and Undo (a tool for test record and playback).

Based on Ruby language, Watir is a set of open-source libraries used primarily for web testing. The name Watir (pronounced as "Water") stands for Web Application Testing in Ruby.

Watir is ideal for cross-browser testing, working particularly well with Chrome, Firefox, and Opera. It can also enable data-driven testing and headless browser testing, which are the two methods essential to executing tests in CI/CD pipeline.

Watir can support Continuous Testing in many ways; one of which is that it can be integrated with Behavioral Driven Development (BDD) frameworks ( such as Cucumber and RSpect) and CI tools (Jenkins).

Developed by Tricentis, Tosca is another codeless and AI-powered test automation tool favorably used for Continuous Testing. As a model-based tool, it can automatically scan and load the AUT without requiring much user intervention.

Tosca is designed to automate test cases for enterprise applications, business intelligence, web, mobile, and API. Up until now, it is providing custom support to more than 160 different kinds of technologies and applications. One advantage of Tosca over other tools is that it simplifies the AUT’s architecture. This makes room for all stakeholders to involve themselves in the testing process.

During Continuous Testing and CI/CD, Tosca can recommend critical test cases so that users can identify the most critical areas of applications, and perform testing on them to save resources. Moreover, it provides easy integration with many Application Lifecycle Management (ALM) and DevOps tools.

Another benefit of Tosca is its virtual services, thanks to which users can flexibly simulate environments.

Testsigma is new to the test automation landscape, which was founded in 2017. Unlike other multi-purpose tools, Testsigma is designed specifically for Continuous Testing. Based on the cloud, it enables test automation on the web, mobile, and also API. As it uses natural language, inexperienced testers may find it easier to get used to Testsigma.

Testsigma is tailor-made for teams with limited resources or complex testing needs but has a need for Continuous Testing. Leveraging Artificial Intelligence (AI), Testsigma automates the detection of potential risks and issues that are caused by frequent changes and modifications to requirements, which are common in Continuous Testing and Agile.

Testsigma’s capabilities can be extended with little efforts thanks to its collection of custom functions. It also allows for easy integration with Selenium, JUnit, and other popular CI/CD tools such as Jira, Slack, etc.

Rational Functional Tester (RFT) automatically generates automated tests by recording users' actions on the SUT and replaying these actions to run tests. Created by the software giant IBM, RFT is one of the most powerful tools for test automation. It supports functional, data-driven, API, performance, and regression testing. RFT uses .Net and Java as scripting languages.

RFT can automate the creation of regression tests based on the actions of users. This capability helps teams continuously monitor the quality of tests against requirement changes.

RFT also provides multiple modes for team collaboration. There is the storyboard testing mode that visualizes testing flows and the scripting mode that allows users to customize features. Users of RFT are advised to leverage IBM Quality Manager, a test management tool also developed by IBM.

But as the tool was around for quite a while now, some of its functionalities may appear unfamiliar to many testers.

Unified Functional Tester is another market-leading tool that was developed by Micro Focus during the boom of test automation.

UFT can aid in Continuous Testing for the web, API, hybrid, Robotic Process Automation (RPA), and enterprise applications. The tool has an image-based identification based on embedded OCR
(ABBYY, Google Tesseract), which replicates the way users interact with the app under test. For Continuous Testing, UFT can be integrated from source control tools (Git or SVN) to CI/CD tools (Jenkins, Bamboo, Microsoft TFS) to enable Continuous Testing.

Using UFT can be challenging for manual testers as it uses VBScript as scripting language. You should look to know if your team has this skill when evaluating the tool.

TestComplete is best used for test automation in desktop, web, and mobile applications. TestComplete also supports many popular scripting languages, such as Python, Javascript, and VBScript.

Test Complete is developed especially for keyword-driven and data-driven testing. Its creators have added AI features that enable dynamic test object recognition and maintenance. TestComplete can also identify and update tests when there are changes to the AUT’s interface.

An all-in-one Continuous Testing just does not exist. Therefore, your choice of tool should depend on your budget as well as your team's resources and expertise. If you are new to Continuous Testing, consider using free tools first. There are Selenium (coding required) or free-version Katalon (no-code) to try. As your team gets larger and more sophisticated with Continuous Testing, your choice of tools may change accordingly. This is when commercial tools become necessary. Since all of the tools we listed above offer free demos and trials, take time to experiment and choose the one that’s best suited for your team.

If you want to learn more about Digital Team and how it can help initiate and accelerate your Digital Transformation, subscribe to our newsletter.