Top 6 Types of Software Development You Should Know 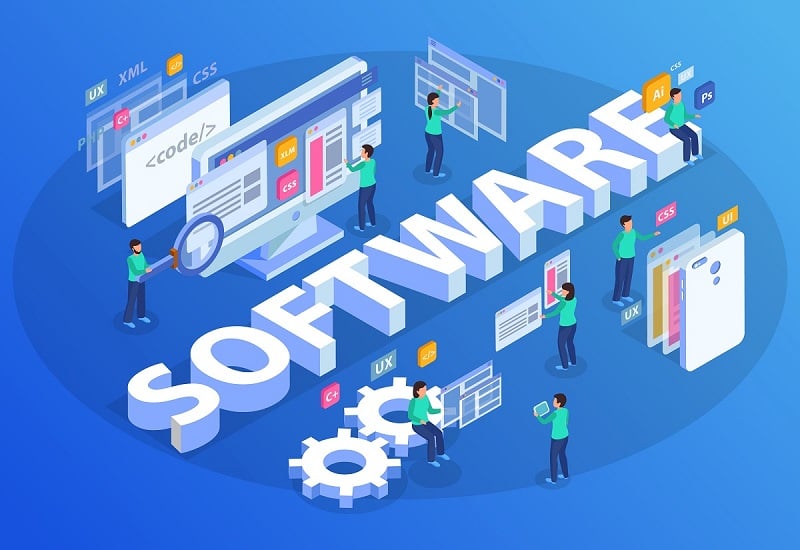 In today’s tech-driven world, innovative digital solutions are what sets companies apart from competitors and win the hearts of consumers. Hence, it’s no surprise that the need for software development continues to rise significantly, with companies releasing new products every few months.

There are various types of software development, some of which are well-established while others have just emerged to adapt to cutting-edge technologies (like wearables or the cloud).

In this article, we will explore 6 specific types of software development that we deemed are essential for businesses:

Web development contains the tasks associated with building and maintaining websites on the Internet or Intranet. To create a web application, front-end and back-end development are required.

The front-end (client-side) consists of all web app components that users can observe and interact with within the browser. Examples are buttons, menus, navigation bars, etc. The frontend is usually constructed using HTML, CSS, and JavaScript, alongside frameworks providing ready-made user interface blocks and reusable codes. React, Angular, jQuery, Ember JS, and Flutter are some popular frontend frameworks.

The back-end (server-side) refers to the concealed part of a web app that users can’t view - the code. It encompasses all features that users can access online. Its primary purpose involves data storage, management, and organization while supporting the client-side to run smoothly. It is made up of a mix of servers, databases, and applications. Typical backend languages comprise Python, Ruby, Java, PHP, and Node.js.

Apart from coding, here are two other vital areas of back-end development:

A database system caters to the collection and storage of raw data. Database development requires developers to know about building and managing data in systems like MySQL, MongoDB, Microsoft SQL Server, or Oracle.

APIs (also known as Application Programming Interface) is a software intermediary that enables two applications to communicate. Typically, they establish a two-way link between web services and web servers to facilitate the transfer and interpretation of data.

Productive leverage of APIs can accelerate innovation and growth, permitting companies to connect systems to offer internal and external value.

Mobile app development is designing and building software applications that are used on smartphones and tablets. Unlike web applications, mobile apps don’t operate in the browser. Instead, they must be downloaded from platform-specific app stores (Apple’s App Store or Google Play) to user devices to be accessed.

Regarding app development, there is always an ongoing debate about whether to create an app that works on several platforms or focus on programming the app for a particular operating system (OS). As each strategy has advantages and disadvantages, the answer largely depends on your project objectives.

When a mobile application is ‘’native’’, it is developed dedicated to a specific platform, such as iOS or Android.

Native app development utilizes programming languages that are customized to each platform. While Swift and Objective-C are often employed to create iOS apps, Java or Kotlin can be used to develop Android apps.

As native apps are designed specifically for that one platform and assembled with their core programming language and APIs, they tend to be more responsive and interactive. Thus, offering high performance and exceptional user experience.

Nevertheless, it can be costly if you determine to launch for both iOS and Android when building native apps, as each platform requires a separate team to work on. This also decelerates bug fixes significantly. In case of an essential and urgent update, it will take more time for you to update multiple native apps simultaneously. In the meantime, users are stuck with a sketchy app that can negatively impact their UX or potentially expose risky vulnerabilities.

Thus, native development is best suited for apps that desire offline flexibility and sophisticated features with a high level of customization.

Unlike native development, software products using cross-platform development are compatible with multiple operating systems. Therefore, they will not likely experience prolonged bug-fixing time thanks to their universal code base. Modifications made to it are automatically distributed to every OS version with minimal refining.

Besides faster development, a cross-platform app usually costs less than a native app while ensuring consistency between platforms. However, when it comes to performance, cross-platform apps can’t be on par with native apps. UI/UX design can also be reduced as developers have to simplify app functionality, like screen layouts and graphics, to maintain uniformity in appearance across all devices.

Additionally, cross-platform frameworks often have delayed access to the newest iOS/ Android updates and features, making them not the ideal selection for apps concentrating on cutting-edge and platform-specific technologies.

With the benefit of being cost-effective and rapid development speed, cross-platform development is a great alternative for startups seeking a low-risk option. Some popular cross-platform frameworks that you can consider are Flutter, React Native, and Xamarin.

Hybrid apps can be regarded as a mix of native and web solutions. They are developed by embedding web-based technologies (HTML, CSS, and JavaScript) into a native app using plugins such as Ionic’s Capacitor, Apache Cordova, etc,. to access native functionalities. What makes them ‘’hybrid’’ is that they employ WebViews to display their content - you can picture them as mini-browser windows within your mobile apps.

Like cross-platform apps, hybrid apps can run on multiple platforms with a single code system. Being hosted on a server also allows them to facilitate the update process, meaning you don’t have to wait long for Apple and Google to approve your app every time you release a new version. Yet, they still can't beat native apps in terms of fast performance and security.

This type of app development is ideal when you’re targeting a broad target audience who uses the app on both web and mobile devices.

Introduced by Google in 2015, the PWA is expected to be a way to bridge the gap between web and mobile apps. Similar to a hybrid app, a PWA is designed with web technologies but with extra tweaks like push notifications through Google Cloud Messaging or access to APIs (geolocation, camera, offline support, etc.). Yet, you don’t have to undergo an approval process to launch your PWA. You can either publish them through installation from an app store or attach them directly to a website.

Despite being in their infancy, they have been adopted by industry-leading companies like Twitter, Alibaba, and Starbucks because of their predominante advantages over native and hybrid apps.

In addition to native-like performance, PWAs offer better search engine ranking and greater availability. Since users can access the app from any device or browser, they deliver a seamless and frictionless omnichannel experience.


Desktop development aims to create software that operates natively on desktops (or laptops), either with or without Internet connectivity. Desktop apps require users to download and install them on their computers.

GNOME and KDE are the two common frameworks in the Linux desktop market.


Wearable technology is a category of electronic gadgets that can be worn on your body or clothing and are connected to the Internet. The most common wearable device is smartwatches.

Fitness tracking and mobile wallets are no longer the only application for wrist-worn tech. Their capabilities have expanded into social media, productivity, and gaming. Wearable development is currently restricted to native only:

In short, cloud computing refers to storing and accessing data and software through the Internet as opposed to your computer’s hard drive.

Cloud-based application can be broken down into three main categories:

IaaS provides a virtual server and storage along with APIs to enable clients to transfer workloads to a virtual machine. Simply put, IaaS is a virtual data center. Microsoft Azure, AWS, and IBM Cloud are some of the most common IaaS platforms.

Now that you’ve decided on the type of your cloud-based apps, it’s time to move on to the cloud deployment models, which comprise public, private, community, and hybrid.

Public clouds are shared resources available to anyone on the internet. Although they don’t support complex customization, they offer excellent scalability and rapid implementation at a fair price. This form of software is suitable for:

Private clouds are created exclusively for the requirements of a specific business. Despite being quite expensive, these solutions offer a more individualized approach, improving customization and allowing better data control.

Organizations have full control over where their data is stored and can build the infrastructure in the manner they choose - primarily for PaaS or IaaS projects - to provide developers with access to a pool of computing power that scales on demand without jeopardizing security.

Community clouds entitle multiple companies to share resources and data. This deployment model is perfect for numerous businesses looking to cooperate within one domain to achieve the same compliance, policy, or mission.

Hybrid clouds are a mix between public clouds and private clouds. Enterprises can use the public cloud to accommodate workload surges or demand spikes while running mission-critical tasks or sensitive apps on the private cloud. The purpose of a hybrid cloud is to establish an automated and scalable system that leverages all public cloud infrastructure’s benefits while ensuring the security of sensitive data.

Embedded systems development is another popular type of software development that is particularly suited to the requirements of internal hardware. They are usually generated to work in conjunction with various processors, microcontrollers, and related components to carry out a certain activity or function.

Moreover, they are designed to operate in environments with limited memory or storage capacity. They are also scalable and adaptable, implying they can be deployed across a variety of devices without difficulty.

This article is by no means a comprehensive list of all software development types - the field is vast and diverse. Instead, we compiled some of the most common types that are essential to be aware of to kickstart your technology project. Hopefully, it will help you get a better understanding of software development.

Still not sure which category your software falls under? No worries. A free consultation is available, and our experts are more than happy to help you get started.

Top 10 IT Services Companies in Vietnam 2022