Nowadays, to maintain software quality in the fast-paced Agile development environment, many companies have invested in adopting test automation during their development process.

Nevertheless, testing costs a great deal: engineering effort, license fees, and labor hours. Are the outcomes worth the price? How can we be so sure?

Most testing teams spent significant time creating and configuring the framework, as well as incorporating the tests into their CI/CD pipeline and scheduling them to run periodically based on checked-in code. Then they determine that this marks the completion of the full automation testing cycle but forget one more crucial component of test automation: assessing the effectiveness of the automated tests.

What I often see at testing projects is that teams are fully aware of the work they put into a project, yet the exhaustion of concluding it prevents them from thinking about its outcomes.

Why do we need Automation Testing Metrics?

DevOps and TestOps management is dependent upon test automation metrics. As it’s difficult to effectively manage a dynamic DevOps environment without a comprehensive understanding of what is occurring at a granular level, the appropriate metrics must be monitored. Additionally, tracking test automation data can benefit businesses in sourcing and acquiring test automation tools.

Here are reasons that you should analyze test automation metrics at the beginning:

How to Choose the Right Testing Metric?

There’s a plethora of metrics that provide you with a deeper understanding of the QA system, the team’s testing skills, and processes to identify and fix issues while boosting your team’s productivity. The following list of commonly-used metrics will help you improve the automation testing process:

Not everything can, and doesn’t have to be automated. Prioritizing automation for the test cases that will yield the highest ROI is a fundamental aspect of any company’s testing strategy. Teams new to test automation that are unsure of how to gauge success can benefit greatly from a ‘’percentage of automatable test cases’’. This metric can help you clearly identify areas in your team that prioritize automation and which still call for manual testing and human validations.

This metric illustrates the percentage of test coverage achieved automatically compared to those done manually. It can aid in uncovering inefficient parts of the software that lack sufficient test coverage and whether your QA team is meeting the automated test coverage goal (the ideal amount of automated testing coverage should be based on your priorities and risk analysis). You can monitor this on a component basis and then summarize the data to visualize it across an entire regression suite.

For example, Visual Testing, often known as visual UI testing, ensures that the software's user interface (UI) displays appropriately to all its end-users. Due to the lack of a test management platform to track the process to any degree of fidelity, it has been conducted using manual approaches.

Now, the process can be automated easily using Katalon’s AI-Driven Visual Testing. The tool allows modifying the scope of visual tests with 3 comparison methods: content, layout, and pixel. Furthermore, it enables you to run in parallel with functional tests to cover both end-to-end scenarios and visual regressions. 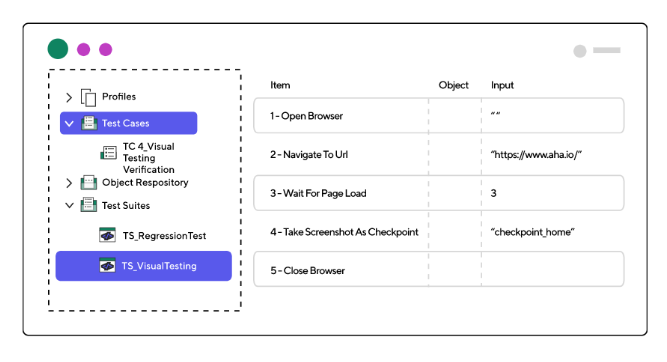 This metric refers to the number of automated test cases executed at a given time to track how well you’re doing in response to the objective of automated software testing.

Through this parameter, you can identify whether there are any significant deviations during the automation testing process. Reasons for these deviations include tasks being put on hold due to higher priorities, unforeseen elements in the software, or the inability to execute tester efforts effectively. It also helps with creating the cadence for doing in-sprint automation.

These KPIs measure total known issues, bugs, and errors discovered in software or other parts over the period of a development cycle. To understand whether your automation is running high-value test cases - look at the number of defects. It is extremely vital in Software Development Life Cycle (SDLC).

The number of defects encountered enables you to decide if the software is ready to be released. As this metric concentrates on the number of flaws detected, it allows QA engineers to identify the weak parts of software that require rigorous testing. The high parameter also reveals that the developing phase has coding difficulties and needs more resources or training.

Regression testing is often the focus of this measure. It evaluates defects found through practical automation testing compared to the overall number of acceptable defects in a project’s test management system.

It's beneficial in figuring out what kinds of flaws the scripts can't find and how different testing environments, such as integration and staging, can impact the script's efficiency. For instance, you might anticipate lower effectiveness in your integration environment as scripting for new features hasn’t been completed. Similarly, in your staging environment, where you generally concentrate on regression testing, you can expect automation to detect the bulk of the bugs.

Do you keep track of how much automation has been accomplished throughout the sprint? And what percentage is then chosen by the automation testing team members? This metric will assist you in understanding how close you are to in-sprint automation and improve the quality of several root causes.

This comprises the quality of backlog grooming, automation framework design, and stability of use cases in the sprint. To be most effective, the QA team should aim to automate new work in the iteration the work is finished rather than in a subsequent sprint.

Suppose automation testing has been integrated into a CI/CD pipeline. In that case, this parameter can be leveraged to measure the tests’ effectiveness by calculating the percentage of shattered builds to stable ones. Testing for robustness and scalability will help determine whether a stable build can be deployed to production. If your builds are continuously breaking, there may be a chance for better unit testing, for instance.

This more straightforward metric measures how many automation tests have passed. In automation testing, it’s used to understand the stability of your automation suite as well as its effectiveness. Having a low failure rate indicates that the script logic is correct, while a low pass rate requires more time spent validating failures. In case there are false failures, that is an early warning sign that your automation suite isn't trustworthy.

However, the disadvantage of this metric is that it cannot show the quality of those tests. For instance, a test might pass as it only checks an unimportant condition or due to an error in the test code, while the software itself is not working as desired.

On a Closing Note

Since many businesses have set up comprehensive automation test suites to expedite their testing process, choosing the right automation testing tools and considering useful testing metrics are worth considering. The positive rate in such metrics shows that your testing progress is on the right track, which can be the consequence of having appropriate skills among team members and the effectiveness of testing scripts and frameworks.

The faster testing process requires more thorough testing metrics, which help not only the QA team identify bugs promptly but also the development team to fix bugs and have appropriate adjustments, resulting in more qualified apps.

In KMS Solutions, we concentrate on providing the best testing process by having skillful QA engineers in the team and choosing the appropriate metrics to deliver the qualified software at a timely manner.