8 Reasons Why Your Test Automation Project Fails [With Solutions] 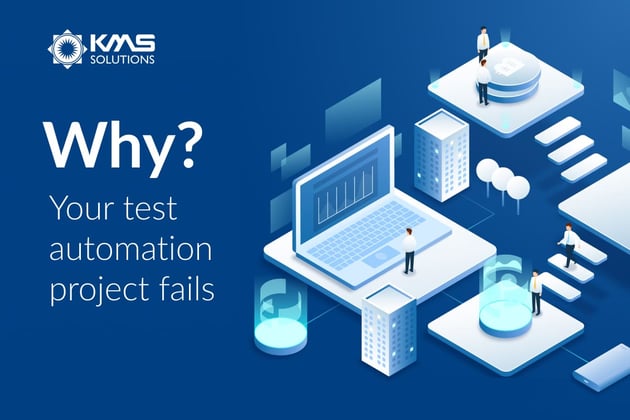 Automation testing is a crucial subset of software testing. By implementing test automation, we’re able to expedite the validation process while ensuring the quality of the products. However, in fact, 64% of test automation fails to deliver as per expectations, forcing businesses to go back to manual testing. This topic will analyze the possible reasons that may negatively impact your automation testing projects.

One of the common test automation misconceptions is that it can be implemented in every test case. Although test automation can help free up your time for executing end-to-end regression tests repeatedly, the reality is that there are some aspects where human intervention and inspection would be mandatory.

Automation can’t replace manual testing, just as robots can’t take over humans. This kind of testing is only appropriate for stable test cases that have the same operation to be performed repeatedly. When testing anything that is subject to rapid change, for instance, new functionalities, automation is not recommended.

It’s essential to keep in mind that achieving 100% test automation is impossible. Instead, you can do a proper test case evaluation to identify where to automate and where to use manual testing. Automation is best for regression tests, integration tests, performance testing, etc., whereas manual testing can be used to test user experience, evaluate images, and more.

Read more: How to choose Test Cases for Automation

Not every developer or QA engineer can carry out automation testing since designing the automation testing frameworks or writing test scripts call for a particular skill set. Choosing a tester that is not well-equipped with essential test automation skills and knowledge can decelerate the testing process and even create considerable blunders.

Besides, hiring automation testers that are deficient in programming languages and automation tools used by your company is also a reason for your testing project failure as they cannot take the most advantage of automation testing.

You can take into account recruiting testers that have extensive technical knowledge. Even though the investment in hiring skillful QA experts is respectively high, the return is worthwhile since you won’t need to train from the beginning. Moreover, as software testers are the intermediates between developers and managers, they also should have adequate communication skills.

Sparing some budget to periodically upskill your workforce is also worth considering. This will help enhance the efficiency and performance of automation testing. In addition, to harness the power of test automation effectively, your teams should have regular discussions or meetings about the testing process, tasks, and practices.

3. “One size fits all” Perspective

If you think one automated test strategy can address all testing problems, you may have a misconception leading to the test project's failure. There is no "one size fits all" rule regarding automation testing since the demand, kind, and percentage of this approach vary depending on different requirements. Moreover, there isn't an ideal percentage or proper figure for automation testing coverage that applies to all businesses.

Besides, to ensure the automated test execution is effective, you should tailor the test to your software by knowing what and how much to automate based on a number of different factors.


Quite often, at the beginning of a testing phase, there are usually a few individuals running test cases automatically while the remaining stay mostly ignorant of their work. This lack of visibility is often due to improper management of the QA leaders since the automation strategies are not well-explained to the development team members. If the automation efforts are not informed clearly, possibility testers miss the chance to collaborate with the right developers to fix bugs immediately.

Moreover, not managing your test automation efforts appropriately also reduces your ability to trace requirements and tests, track the testing processes well as the results, etc.

Get all the test management templates to boost your automation project’s productivity!

5. Not Concentrating on Test Reports

As many tests are carried out during the automation testing process, chances of failure are high, requiring you to analyze the test reports carefully. Failure to carefully examine the test reports or not paying enough attention to the test results can lead to the key faults going unaddressed and, ultimately, wasting time, resources, and efforts.

Some automated tests succeed, and some may fail; hence, to unveil and solve any underlying issues in time, it’s mandatory to analyze the reasons behind certain tests’ failure.

Firstly, it’s essential to ensure that all QA engineers have profound knowledge of report analysis and abilities to find possible test deficits. Building a practice of frequent examining test reports among the testing team is worth considering.

Some aspects that you should concentrate on when examining the results:

With a wide range of automation tools out there, sometimes it becomes challenging to select the ideal one that can meet their testing requirements and the organization’s objectives. As every tool has particular capabilities, choosing the inappropriate one may decelerate your testing process or restrict you from achieving the testing goals.

Besides, every team has a budget, and some fix automation testers with particular testing skills. Hence, failing to shift through the chaff and picking out the right tool may cause costs, time, and resources-consuming.

Before jumping on to selecting a hyped tool, carefully line out some key considerations for automation tools, such as team budget, testers’ skills and knowledge, test report capabilities, etc. Then, you can decide what is expected from the tool by concerning the following questions:

If you need an all-in-one automation test platform for DevOps and continuous testing, Katalon will be a great choice. The tool will help you run test cases on most devices and browsers, such as desktops, websites, and mobile apps. It also provides advanced reporting, real-time monitoring, and fast feedback system, making it easier to track product quality.

Generally, complicated test suites require more time to execute than anticipated, which compromises the test queue’ quality in your respective IDE and test automation framework. By executing the tests sequentially, you may create queue timeout issues, resulting in an abrupt halt in test cases. Since this approach will restrict you from proceeding to the next test cases (unless you’ve completed the previous task) or running your test cases simultaneously, it’s one of the reasons that make your test automation projects fail.

Parallel execution, as opposed to sequential execution, enables the simultaneous execution of numerous tests in various contexts. In modern testing solutions, this has been enhanced with the incorporation of cloud technology, which enables massively parallel execution.

However, automated testing could result in unexpected code interactions, making debugging the cause of the failure becomes challenging. Therefore, you need a robust reporting mechanism that provides specific insights into your test run.

Regardless of your business’s type, ROI is one of the main targets that every stakeholder strikes for. And irrespective of how much time and effort you invest into developing your test automation suites, if the ROI generated from them is not as per estimations, then their importance will be far lower than you anticipate. So, by calculating the right ROI at the beginning, your team will have an accurate testing strategy for deciding whether to run the test cases automatically or manually.

While calculating ROI on test automation, there are several metrics that you should consider:  test coverage, speed of test, cost savings, and more. Here’re tips to estimate the right test automation ROI:

Read more: How to calculate ROI of automation testing?

Having a Robust Plan for Automation is a Key

Automation testing can undoubtedly enhance the productivity of your company. The key here is how to effectively tackle all the obstacles and issues that come with it.

As there are a number of potential snags that might prevent you from testing effectively, it’s crucial to analyze the common roadblocks first. Therefore, before adopting the automation approach, having a proper automation plan regarding the business’s requirements, product’s time-to-market, team skills, and available budget will help you avoid catastrophic test automation failure while ensuring the costs spent.

Regardless of being a team member or manager, keeping track of the test performance is essential to ensure the product's release velocity and software quality. This collection of Testing Project Templates can help you map out a test plan, review the testing process and reduce test fails.

How Automation Testing Fits in the Agile World?